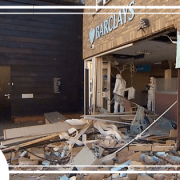 In a recent BBC show, it has been reported that crimes in rural areas is at a 7-year high – costing the UK economy £50million a year.

One rural crime that has seen an increase in ATM’s (cash point) being torn out by stolen farm machinery. These ‘Smash and Grabs’ of ATM machines have seen businesses and banks become heavily damaged – making banks reluctant to replace stolen ATM’s or reopen their rural branches.

Great Shelford, Cambridgeshire has been one of the hardest-hit rural communities in the UK for smash and grabs on ATM machines, with the village seeing two of it’s ATM’s be ripped out by stolen farm machinery and never replaced.

In Britain, there were 1,000 smash and grabs involving cash points in 2018, with half happening in the countryside.  Rural communities such as Great Shelford rely on physical cash transactions rather than using card and these attacks on ATM’s have seen local shops see fewer customers and many businesses having to compensate with having to pay bank charges for card transactions.

But why are ATM raids on the rise?

Although there is a higher risk with stealing heavy farm machinery and tearing out ATM’s out of banks, there is a higher reward with some ATM’s storing up to £100,000 in cash. Many rural ATM’s will have larger sums of cash compared to ones in the city because they are refilled less often.

Another reason why ATM raids are on the rise is that police response times are double what they are in towns or cities, allowing criminals more time to steal an ATM machine.

To some, smash and grabs on ATM’s may look opportunistic but they are very sophisticated crimes. With criminals researching, looking for farms close by and looking for heavy machinery big enough to rip out ATM’s.

Although the police are taking measures and are working with local farmers to ensure that they are taking precautions to prevent the theft of vehicles. However, due to their nature farmers can’t close gates to their farms as they operate 24hrs.

Police in Norfolk have seen trends in these smash and grab crimes with Telehandlers being used to rip out ATM’s from banks and many of the crimes being committed by people living in rural communities and have experience operating farm machinery.

So, what measures can you take to prevent the theft of farm machinery?

If your farm or business is in need of extra security services, then get in touch with A&R Security Services. We can provide comprehensive security solutions to businesses across South Wales and the South West. To find out more call us on 01656 713950 or visit our website for further details.