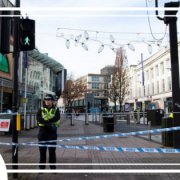 In a recent violent incident in the centre of Cardiff – where 6 were hurt in disorder and stabbings – there are questions surrounding whether or not the rise in knife crime is to blame.

On Saturday, 6 individuals were taken to hospital after being violently attacked by a group of four people aged 16 and 17 – one sustaining head injuries and another three stabbed (non-life-threatening). The incident was dealt with quickly by South Wales Police who detained the four people who began the attack. However, they have urged parents who suspect their child was involved in the incident to come forward.

But has this incident highlighted the increase in Knife Crime and is there enough being done to prevent such an attack from happening again?

Compared to London, Manchester & Liverpool, Cardiff is relatively small in size and population and has a small number of knife-related crimes compared to them. However, in 2019 there were a number of knife-related incidents. In a 3-month period during the summer of 2019, three young men in and around Cardiff lost their lives. In June Fahad Nur died after being stabbed 21 times near Cathays Train Station. Asim Khan, 21 died after being stabbed in St Mary’s Street in July and Harry Bake who was 17, died from stab wounds last September.

And earlier this year in February 2020, South Wales police were issued a Section 60 that allowed police officers the powers to stop and search those who are suspected of holding a knife in the areas of Butetown, Grangetown and Riverside. This came after two men were stabbed 24 hours of each other – one incident in Riverside’s Seamon Street and another in Butetown’s Loudon Square.

In light of the recent crimes involving knives, individuals from local communities within Cardiff have set up charities to help support young people to stay away from knife crime. James Bourne who runs local self-defence classes (Kalah) regularly gets calls from his community asking to retrieve knives that have been found within homes and understands the devastating effects Knife Crime can have (with him being a close friend to the family of Asim Kahn). In an interview with Wales Online James was asked how the issue surrounding Knife Crime could be solved and said “The only way forward is harsher sentencing powers for those found committing knife crime, and greater police power to prevent it getting to that situation”

James added, “it’s not just teaching them, it’s showing them. I show my students videos of parents who have lost their sons”. You can read more here

Two years ago, South Wales Police launched Operation Sceptre, an in your face approach to tackling knife crime and the problems of serious violence and drugs that are associated with it.

Superintendent Wendy Gunney, Lead for Operation Sceptre said “Police forces across the country have recorded a rise in knife crime but mercifully the level of those offences in South Wales is not the same as in other parts of the UK, with knife crime remaining rare for the vast majority of communities here.

“But we can never be complacent. Every incident involving a knife has consequences for all those involved and so this is an issue we take extremely seriously.

“Under Operation Sceptre we have put in place a number of measures to address any concerns communities may have and clamp down on those who are carrying and using knives.

“We have invested in a number of measures to help tackle the issue.” – you can read more about Operation Sceptre here

You can read more about recent knife crimes in England and Wales in our blog here.

Sentences surrounding the carrying and the use of a knife range from six months custodial sentence and a maximum of 4 years. However, there are calls for harsher and tougher sentences to be issued to those carrying knives to help dissuade others from carrying them.

What should you do if you suspect someone is carrying a knife?

Knives are very easy to conceal on a person. Keeping yourself safe is vital and if you are confronted with the threat of violence, you should immediately walk away. Once you are safe, tell someone you can trust – a parent, teacher, lecturer, friend or the police.  It’s vital that you report anything you know about knife crime to the police on 101 or crime stoppers anonymously on 0800 555111. You can also report anything to do with knife crime 100% anonymously via fearless.

A&R Security Services can provide tailored professional security services for any business. For more information on how we can effectively protect your business contact us on 01656 713950 or here via our website 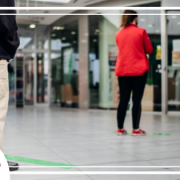 When we think about those working through the pandemic, many think about the NHS staff, police force, fire, and ambulance services. But there are one group of key workers who have been vital in keeping Wales and the rest of the UK going and that are retail workers.

However, since the start of the lockdown in March, there has been increasing reports of retail workers receiving violent and abusive behaviour from customers. In response to this increase in violent behaviour, one supermarket chain Co-op announced that they were going to supply frontline staff who worked at 250 stores with body cameras.

The issue surrounding retail workers becoming victims of violent and abusive behaviour is one that has been around for years. But has the recent COVID-19 pandemic caused this sort of behaviour to increase? And is there anything being done to help protect retail workers?

In a recent article from ITV Wales, it mentioned that violent and abusive behaviour more than doubled during the pandemic, with the USDAW (a union representing welsh shop workers) calling for a law to protect retail workers from such behaviour.

Many retail workers who worked at supermarkets and other retailers felt anxious returning to work in fear that they would either be spat at, coughed or sneezed in response to them asking for customers to socially distance – as well as being pushed and verbally abused when enforcing buying limits on in-demand goods or being unable to issue returns on goods.

The USDAW conducted a survey and found that 1 in 6 shop workers were being abused on every shift and well over half (62%) of 5,000 workers surveyed said they experienced verbal abuse since the start of the pandemic. Whilst a third had been threatened by a customer and 4% had been assaulted.

One retail worker who took part in the USDAW survey said “I had never cried in work until the first week of the lockdown. I received constant abuse from nearly every customer during one shift when the rules were changed so that we couldn’t accept returns. I finally broke when one woman refused to leave the store and insulted me and berated me for not doing the return.

“The following day a man was very aggressive towards me for the same reason and I could visibly see him twitching in a way that suggested he was about to become violent. My job has become emotionally draining and it is really starting to affect my mental health.”

When averaged across the entire retail sector of 3 million workers, it showed that 3,500 workers were assaulted every day over a 34day period.

So what action is being taken to ensure the safety of retail workers?

The government has set out plans to crack down on the violent and abusive behaviour the retailers face on a daily basis. This included working alongside the National Retail Crime Steering Group (NRCSG) on best-practise guide to help support shop workers report acts of violent and abusive behaviour, strengthening and making full use of existing laws, and improving data sharing between businesses and the police.

However, there is opposition out there who think that the government’s plans aren’t enough to protect retail staff effectively. The BRC and Association of stores have both criticised the home office for not seeking to introduce specific and harsher offences to those attacking shop workers. ACS’s CEO said, ‘Warm words and working groups aren’t enough; we need tougher penalties for attacks on shopworkers and more police resources to stamp out violence”.

If your retail staff have been a victim of abusive and violent behaviour before and during the pandemic, then speak to us about our effective retail security solutions. Our manned guards hold full SIA licenses and are fully trained to act accordingly to protect your retail staff from abusive and violent customers. To learn more about how we can help take a look at our website here or get in touch with us on 01656 713950.